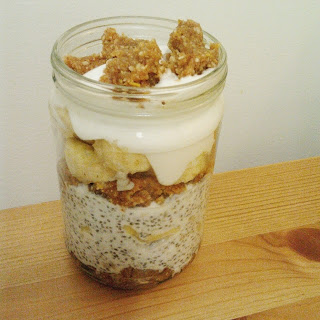 Nothing says summer like plenty of fruit and a super sweet and vegan banana pudding. I made this with chia seeds and coconut cream. It is high in fat so I would only eat a small serving at once especially if you're doing high carb low fat. But if you need a sweet pick-me-up, this would be perfect.

Once you have it all layered, put the mason jar in the fridge or eat right away. You don't have to make the pudding in a separate glass and refrigerate it but it makes the recipe a lot easier and less messy to do it that way.

I just went running in central park and I feel great! No leg pain or muscle aches. I'm going to do yoga in bryant park later today and then walk around the library area. Love midtown! And it's another day of beautiful weather, low humidity and temps in the low 80's. Happy summer!!