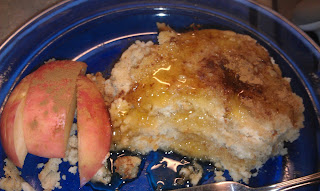 Happy Saturday morning!! I tried a new pancake recipe and it was delicious :) I can't wait to pass this on....first off, go run out and get yourself some brown rice flour. Arrowhead mills makes it as does Bob's Red Mill. Don't be afraid to experiment with new flour. There are so many out there and they are so much more nutritious than refined white flour. Also, brown rice flour is gluten free. And buy that coconut oil and that agave nectar. Stay away from white sugar. I decided to make apple cinnamon pancakes because I made applesauce to put in the mix. So I wanted to bring the apple taste throughout.


Before you start, cut a small piece of an apple and set aside. You're going to slice that into three smaller pieces to garnish your plate. Peel the rest of the apple and put in a food processor. Turn your processor on high, add a tiny amount of water and keep on high for a few minutes. Add some cinnamon and continue to process. Turn off the processor and set the cinnamon applesauce aside. Here is what else you need:
1 1/2 cup of brown rice flour
The applesauce that was processed and set aside
1tsp of cinnamon
1tsp of baking powder
1tsp of vanilla extract
1 tbsp of agave nectar
1 tbsp of coconut oil (heated to liquid form)
1/2 cup of almond milk

Combine the agave nectar, milk, coconut oil and vanilla in a bowl and keep stirring. In another bowl, combine the flour, cinnamon and baking powder and stir. Add the applesauce to the flour mixture. Then add the liquid ingredients. Mix, mix, mix! If you need to add more milk to make it thinner, add more. Spray a skillet with coconut oil. Pour the batter into a skillet to make whatever size pancake you want. Flip over, keep the heat low to medium. Stack the pancakes and spread them with Earth balance vegan butter if you usually use butter. Pour agave nectar or maple syrup over the pancakes and sprinkle with cinnamon. Cut the piece of apple you set aside into three pieces and put next to or on top of the pancakes. Sprinkle more cinnamon.

The pancakes will be light and may break apart easily. This is because brown rice flour is not as dense as regular all purpose flour. It also tastes lighter. Experiment with other flours. There are no rules with pancakes! I hope you enjoy this recipe. Next pancake recipe will involve dates!